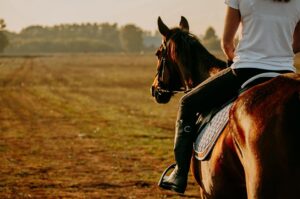 Two years ago, I made a financial decision that changed my life. Even though it cost more money than I paid for my first car, I bought a horse. Melissa Ashcraft, owner of Transitions Equestrian Center where I ride and one of my partners in our new CBD business, Brave Horse, posted him for sale on Facebook. He was truly stunning but when I saw the price tag – let’s just say it was hefty – I dismissed the thought of buying him. But then I met Bo at the barn and Melissa urged me to “just ride him for fun.” Savvy girl. I was hooked. And thus, began my journey with this beautiful, complicated, ornery, loving, anxiety-ridden hot mess of a horse. I was in love.

What a journey it has been. Although I had ridden for years, I was not a strong rider, nor a schooled rider. I had no idea what soft hands or collection meant. I was clueless when Melissa barked at me to supple the inside rein or he’s behind your leg. Well, of course, he is, half of him is always behind my leg! But after two years of lessons, I was grasping the concepts fairly well, and then came Bo. We had to toss out all the normal conventions and figure out how to talk to him in his language – which changes daily. But now that we are two years into this journey, Bo and I, along with the help of a generous daily dose of CBD to get him focused, and really intense training for both of us, have become a good team. We’ve built trust in each other. He had been cycled through a few owners and it was apparent that he’d built up a repertoire of avoidance tactics out of fear and intimidation. I had taken a bad fall years ago that left me fearful of losing absolute control of the horse, which as we all know is a myth. We slowly learned to rely on each other. He is my mental health therapist, my sounding board, my quiet resting place. I am his protector, his guide, and of course the source of all treats! Although I am 60 years old, I feel like a 14-year-old horse-crazy girl when I am with him. And I wouldn’t trade it for the world.

Melissa encouraged me to ride Bo in classic dressage, hoping to teach both of us softness, yielding, and communication. While it was a challenge because he had never been asked to do those specific actions, eventually we both got the hang of it. Then we needed new challenges because the last thing either of us wants is to get bored. We played around with working equitation because Bo is so adept at many of the techniques needed such as bending around a barrel, dragging a garrocha pole behind us, rotating on both the front and hind, side-stepping, etc. that I thought it would be a piece of cake. It turns out that Bo can do all those lovely things in the middle of the arena but if he has to stand next to something and do it, he simply collapses mentally. (Imagine the rolling eyes emoji here). We’re working on it. It was fun and much more exciting than endless circles in three gaits. So, this weekend we again decided to try something new.

I had seen Natasha Hockaden in several equine performances shows shooting archery off the back of her mule, Mooney. She is amazing. And while it looked like great fun, I could not imagine being able to drop the reins, load an arrow in a bow, shoot, and hit the target while cantering around an arena before a cheering crowd. Of course, she made it look easy, but we all know how hard it is to get a horse to do anything! Especially one that spooks when I sniff. But nevertheless, when Melissa announced that Natasha was coming to our barn to put on a beginner’s clinic in mounted archery, I readily signed us up! Actually, I think it was the wine talking but, I let my bravado be my guide and soon found myself sitting on Bo in the arena with a longbow in one hand and an arrow in the other, waiting on my turn to run the gauntlet and try to hit a target!

Natasha is a fantastic clinician, well-prepared and ready to help all her students find success. She started us on the ground, learning to “knock” an arrow, find some semblance of aim, and fire our bows. Then we did it at a walk and finally a jog to get the sensation of shooting while moving. After an hour of practice at these techniques, we moved on to the mounted part, where the real fun began. Bo was at first quite wary of the targets, the poles on either side of the aisle where we would ride, the bows and buckets of arrows, but after a few passes, he calmed down. No horse-eating monsters that he could see. Then we started practicing shooting from the saddle. Every time I would release an arrow, he would flinch. I could tell it was just going to get bigger and bigger because that is his classic M.O. Sure enough, the flinch got bigger at the walk by the target and even bigger at the trot! I had given up trying to hit the target; I just wanted to fire the arrow and stay on my horse and not have him charge through the other riders in a complete panic. My sweet brave boy worked his little heart out and pretty soon, we were riding the gauntlet and shooting somewhere near the target and making it out in one, somewhat controlled piece! Luckily, I have no problem laughing at myself. Also, Bo has taught me that I need a really good seat, which has saved me from falling many, many times. We honed those skills even more on Saturday.

It was an incredibly fun day spent with my best friend learning a new skill and as always learning about ourselves. He was incredibly brave, given his innate fears, and to my surprise, so was I. I was not afraid once, partly due to trusting my horse and Natasha’s expert instruction. Will Bo and I be signing up for the mounted shooting performance any time soon? No, probably not. But we got to try something new and we both survived to ride another day.