My horse is not the only horse to benefit from Brave Horse CBD. My partner Rebecca’s horse Kelso was diagnosed about a year ago with EPM, or Equine Protozoal Myeloencephalitis. Fortunately for Kelso, Rebecca caught it early. Like many of our owners at our barn, Rebecca had one of our trainers working with Kelso twice a week, as well as body work from Tiffany Downs, a certified equine therapist, at least weekly. Between the two of them, they recognized that something was wrong. 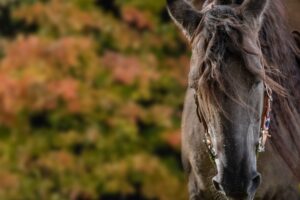 At first it was a guessing game as to the cause of the problem, but Kelso’s symptoms soon became apparent. The first symptom was subtle, but if you know your horse like Rebecca knows Kelso, it was obvious. Kelso would back up the wall in his stall and lean all his weight against it, parking himself there for hours. Rebecca mentioned that it reminded her of how her dad in his last years would hold himself up when he was trying to stand.

The other symptom that was a dead giveaway was when Kelso was working in the arena. He would drag his back feet through the footing like he was ploughing a field, leaving long furrows with every stride. It was painful to watch. Of course, everyone tells you “Don’t Google it!” but Rebecca knew something was up and did her research. She was on target because when the vet that came out, he was instantly suspicious of EPM. Kelso still had pretty decent muscle strength, so he could stand securely when his tail was pulled to the side, a common test for EPM, but he failed the foot placement test. Katie, our trainer who rode Kelso twice a week also reported that when she would ask Kelso for a canter, he would oddly throw his head to the side which she took to indicate poll soreness.

Once the test results came back, EPM was confirmed. Just so you know, EPM is caused by a parasite that is only found in opossums and is transmitted through their feces. If your horse grazes in a field or consumes contaminated hay or water, they can develop EPM. This insidious parasite migrates from the digestive tract into the bloodstream and crosses the blood/brain barrier. That is where the parasites begin to attack the horse’s central nervous system. Symptoms can vary and if you see more than one symptom, the diagnosis of EPM is crucial in early treatment. These are some important indicators that affect successful recovery:

– Duration of illness.
– Number of organisms ingested.
– Area of the brain or spinal cord where the parasite localized.
– Stressful events following infection and/or while being treated.

Luckily for Kelso, he was already on a 100mg dose of CBD given in two doses morning and night. Once he was diagnosed, Rebecca started Kelso on the Marquis paste to kill off the parasites that were wreaking havoc in his brain and spinal cord. In addition to the Marquis paste, we doubled his dose of CBD to 100mg twice a day to help combat the inflammation and help with stress and anxiety. By the second week, he had really begun to perk up, so Rebecca decided it was time for some light rides with Katie. Katie was a God send! An amazing rider and experienced eventer, Katie had taken a bad fall which resulted in hospitalizations and many months of rehab for her to walk again. Katie, with firsthand experience in long rehabilitation, treated Kelso’s training as if it was rehab.

She was understanding and loving, bringing Kelso along at his pace and capabilities. At four weeks of treatment Katie started working him with ground poles and incorporating side passes. Kelso was so happy to be able to pick his feet up and the spring in his step surprised even him. It was really beautiful to see this magnificent horse, who had been so debilitated just months ago, prancing around the arena like a two-year-old! The CBD was an essential partner in Kelso’s recovery. Kelso could not have come back so strong without the help of his